The liturgy of icons 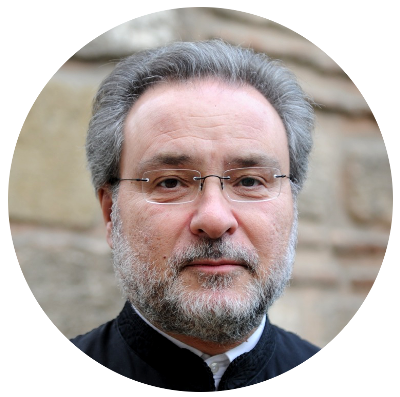 Spiritual Insights into an Orthodox Eco-Worldview

(i) Introduction
For an outsider, attending an Orthodox liturgy feels very much like entering a world with a distinct architecture, a peculiar iconography, and even a remote altar space.1 But for Orthodox Christians, the liturgy is the realization of heaven on earth. This is the heart of the liturgy. It is the presence of angels and archangels, the earth and all its people, indeed the whole of creation and the Creator too.
In this regard, the liturgy is an icon of an all-embracing drama, a meeting-place and intersection of material and divine. In fact, liturgy and icons reveal the genuine meaning about why creation is a fundamental vocation and mandate for Christians.

(ii) Liturgy, Icons, and the World
This truth is made plain during the Small Entrance of the Liturgy of St. John Chrysostom that is celebrated every Sunday in Orthodox churches. At every divine liturgy, Orthodox Christians pray: “Make with our entry an entry of your holy angels in the liturgy.” “In this mystery,” as the liturgy continues with the Great Entrance, “we become icons of the cherubim.” Indeed, as the fourth-century Archbishop of Constantinople John Chrysostom affirms elsewhere: “Those in heaven and those on earth form a single festival, a shared thanksgiving, one choir.”2
Nevertheless, for the Orthodox, liturgy is more than just heaven; it is also the consolation and intimacy of home. So when Orthodox Christians enter a church to attend liturgy, it more than often appears that they are entering the familiar surroundings of their home. There is a sense of homeliness and informality. Indeed, people generally behave inside the church much as they behave outside. There is no sharp division between sacred and secular. Instead, there is much motion, commotion, and even emotion: people drift in and out, light candles, kneel or bow, venerate icons or make the sign of the cross.

This communal aspect of worship is very central to the Orthodox mindset. There is a deep sense of belonging, within which one still maintains one’s own individual, personal rhythm. So, upon entering church, we Orthodox do not set out to pray alone. Instead, we light a candle before an icon—an image of holy men and women among the heavenly “cloud of witnesses”—and place it alongside all the other lit candles.
Still, in many ways, the secret of Eastern Christian spirituality lies more in that which is unseen and unheard. The vision of God is an encounter of light, but only in an awareness of the reality of darkness. The liturgy thus serves as an act of communion, where icons reveal the divine face of God, but only after we have confessed the shattered image in ourselves and in our world. Deification is always encountered as a way of perfection and salvation, but only after we have experienced the way of imperfection.
In this an “iconic” worldview, then, the vision and boundaries of the world become far broader than the limited space or life of any human being. I may be the center of this vision or theophany, but in and through the liturgy I become aware that I am but a detail of the world. The world ceases to be something I observe objectively and instead becomes something of which I am a part. I no longer feel a stranger (threatened or threatening the world); I am a friend in and of the world.

In liturgy, an iconic understanding of the world prevails. In this perspective, the “other” world penetrates “this” world, while the eternal informs the historical. Nothing is profane within this vision; nothing is neutral. Everything is an icon indicating and revealing God. The whole world becomes a “cosmic liturgy,” as Maximus Confessor professed in the seventh century.
If when Orthodox Christians enters the church, they are entering the comfort of their own home, we might also say that, when they leave the church, they remain in liturgy because the whole world is a sacrament. In some ways, our “original sin” lies in our failure or refusal to view life and the world as a sacrament of communion with God. Well, the liturgy restores the balance of communion in our world. The liturgy transforms the world, becoming the promise of the world to come. It is the showering of the light avowed and affirmed at the conclusion of the liturgy, when Orthodox Christians joyfully proclaim: “We have seen the true light.”

(iii) Liturgy, Icons, and Ecology
Of course, whenever we speak, we draw on established values of ourselves and of our world. The technical language that we adopt depends on and influences the values and the images that we promote. In this framework, icons reflect the way we view and perceive creation. Just as liturgy echoes the way we celebrate and respond to creation. A sense of the holy in nature implies that everything that lives is holy, that everything that breathes praises God (Ps. 150:6). The whole world is a “burning bush of God’s energies,” as Gregory Palamas observed in the fourteenth century. If we stand still, if we are sufficiently sensitive, then “our eyes will be opened to see the beauty of created things.”3

And seeing clearly is precisely what icons teach us to do. The world of the icon offers new insights, new perceptions into creation. It reveals the eternal dimension in everything that we see and experience in our environment. Our generation is characterized by a sense of self-centeredness toward the natural cosmos, by a lack of awareness of or communication with the beyond. We are so often inexorably locked within the confines of our concerns, with no access to the world outside or around us. We have broken the sacred covenant between ourselves and our world.

Well, the icon restores and reconciles. It reminds us of another way and reflects another world. It provides a corrective to our culture that gives value only to the here and now. The icon aspires to the inner vision of all, the world as created and as intended by God. The icon articulates with theological conviction our faith in the heavenly kingdom, removing any distance between this world and the next, between matter and spirit, as well as time and eternity.
It is said that the first image attempted by an iconographer is the Transfiguration of Christ on Mount Tabor (Mt. 17:1–9). Precisely because the iconographer strives to hold together this world and the next, to transfigure this world in light of the next. Because by disconnecting this world from heaven, we ultimately desacralize both. The icon reminds us that there can be no double vision or double order in creation.

This is why the doctrine of the divine incarnation is at the very heart of iconography. In the icon of Jesus Christ, the uncreated God assumes a creaturely face, a beauty that is exceeding (Ps. 44:2), a “beauty that can save the world.”4 And in Orthodox icons, the faces—whether of Christ, or of the saints in communion with Christ—are always frontal, depicted with two eyes gazing back at the beholder. The conviction is that Christ is in our midst, here, Emmanuel (Mt. 1:23). Profile signifies sin; it implies a rupture in communication or communion. Faces are frontal, all eyes, eternally receptive and susceptive of divine grace. “I see” means that “I am seen,” which in turn means that I am in communion. This is the powerful experience of the invisible and the immortal, a passing over to another way of seeing. This is “Passover,” Pascha, resurrection.

In brief, the icon converts the beholder from a restricted, limited point of view to a fuller, spiritual vision, where we see everything as reconciled and united in a single reality, “in Him through whom all things live, move, and have their being” (Acts 17:28). For the light of the icon is the light of reconciliation, the light of restoration, the light of the resurrection. It is not the waning light of this world; it “knows no evening,” to quote an Orthodox hymn. This is why icons depicting events that occurred in daytime are no brighter than icons depicting events that occurred at nighttime. The icon of Gethsemane, for example, is no darker than the icon of Pentecost. The icon of the resurrection is no brighter than the icon of the crucifixion. The icon presupposes and proposes another light in which to see things, a “different way of life,” as the Orthodox Easter liturgy proclaims. It is a vision that liberates us and provides another means of communication, beyond the conceptual, the written, and the spoken word. In the liturgy, the icon adopts the language of silence and of mystery, the language of the kingdom to come.

(iv) Conclusion
Therefore, from an ecological perspective, we can say that entire world is an icon or door, a window or point of entry to a new reality.5 Everything in this world is a sign, a seed. “Nothing is a vacuum in the face of God,” wrote Irenaeus of Lyons in the second century; “everything is a sign of God.” Everything and everyone, contains this new dimension, bears this renewed transparency. This is why, in icons, rivers assume a human form. So, too, do the sun and the moon and the stars and the waters; they all acquire human faces; they all adopt a personal dimension—just like people; just like God.
And if the earth is an icon, if this world is an image that reflects the presence of God, then nothing whatsoever can possibly be neutral, nothing at all can lack sacredness. The Christian is simply the one who is capable of discerning and encountering Christ everywhere. The Christian is the one who can recognizes and respect the whole world as the dwelling-place of Christ. For if God is not visible in creation, then neither can God be worshiped in heaven.